Ohio - Charlie Huggins, one of the most celebrated basketball coaches in Ohio high school history, has died. He was 87.

News of Huggins's death was first made public via Facebook Tuesday afternoon.

Huggins' teams made seven appearances in the Ohio state basketball tournament and brought home the championship three times, including in 1967 when Huggins helped Strasburg to a 27-0 undefeated season and a 54-47 victory over Arcanum in the final.

Huggins was an eight-time District 5 Coach of the Year and a two-time Coach of the Year honoree at the state level. He coached in the North-South All-Star Cage Classic in 1967 and 1978 and was inducted into the Ohio Basketball Hall of Fame in 2016.

Huggins was also known for his conducting of the Eastern Ohio Basketball Camp for many years at Sherrodsville's Eastern Ohio Sports Complex, later operated by his son, Larry.

Huggins's son Bob is known for his coaching in the college basketball world, having spent over four decades between Walsh, Akron, Cincinnati, Kansas State, and currently West Virginia. Harry, meanwhile, has also worked as a high school basketball coach, including a brief stint as Strasburg's head coach in 1990. 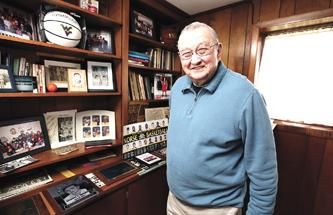