When deer and turkey were extinct in Ohio

As of Sunday February 7 2021, 197,735 deer were harvested in this past hunting season, according to the Ohio Department of Natural Resources (ODNR). With the recent news of the most successful deer harvest in our great state over the past 8 years, it's hard to imagine a time when deer would be extinct here. But that was indeed the case. In 1909 wild turkeys and whitetailed deer were declared extinct in Ohio. While there is a lot of speculation as to what contributed to this, it's sufficient to say that the deer and turkey numbers were nothing like they are now.

So how did we go from extinction-level numbers to becoming a national hunting destination? Conservation. Conservation in the form of hunters, and state organizations, working together have produced a success story that should be echoed for generations. In the milieu of the modern political landscape, terms like "conservation" evoke strong passions in residents across our state. The term can often conjur up an unintended ideology in the mindset of others. In simple terms, conservation simply means, "prevention of wasteful use of a resource".

Hunting is not a wasteful use of a resource, now, or ever. It would be absurd to suggest that hunters during the pioneer era up to the turn of the century were hunting for sheer recreation, or some profound gluttony. The combination of weather events, land usage, and the dependence on local resources certainly contributed.

But is there something else that could have contributed to this event? Something perhaps not realized before? Well, in careful observation of the systemic cylce of events leading up to this unfortunate situation, perhaps the migration of coyote into the state also played a significant role. 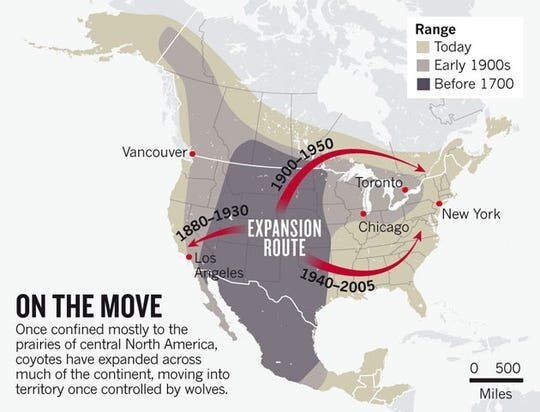 Today coyote hunters across the state harvest scores of coyotes in an effort to control their population. Despite this, there does not seem to be any shortage of coyotes, deer, or turkey. Instead, there seems to be a balance. The ODNR and the Ohio Division of Wildlife maintain this balance through careful observation, education, and law enforcement. It's a wonderful system that makes our story of success unique in these United States.

Despite the rhetoric, "hunters and habitat" is not a plausible sole explanation for the extreme decline in Ohio's deer and turkey population in 1909. Hunters are now, and always have been, on the front line of conservation. Additionally, hunting generates over $1 billion in economic activity in Ohio, according to the Ohio Travel Association. So the next time you see a hunter, be sure and thank them for their contribution to, not only the success of our conservation legacy, but also for their contribution to our state's economy. And certainly don't forget all that the ODNR, and the Ohio Division of Wildlife do for our state, in so many countless ways.