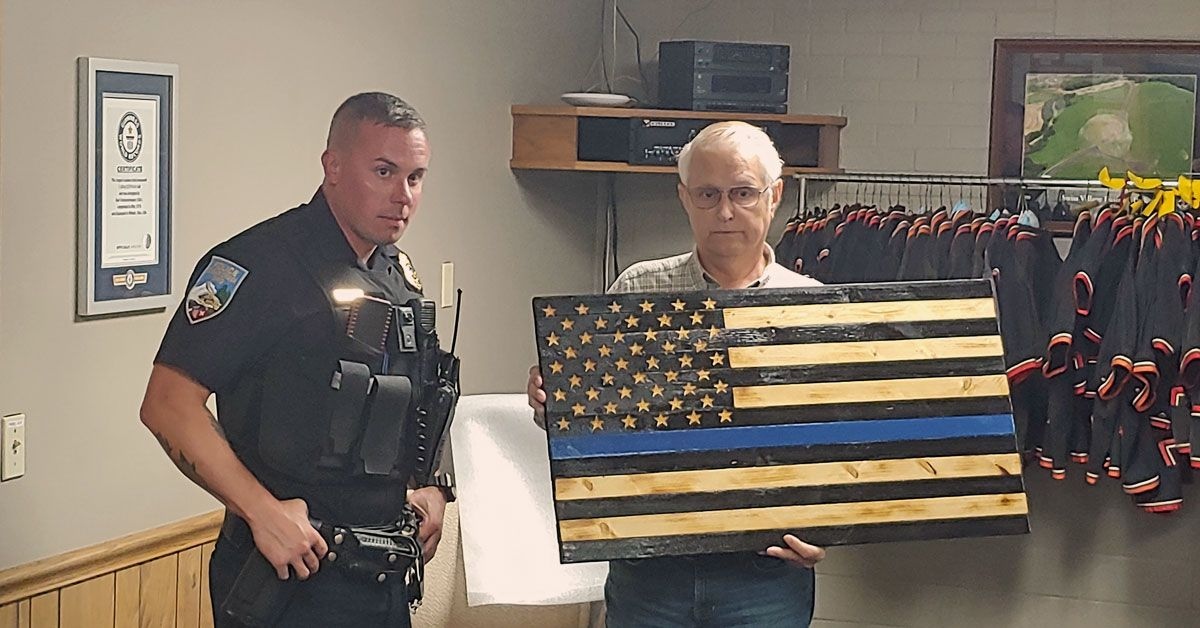 SUGARCREEK (Tusco TV) - The Sugarcreek Police officer injured in the line of duty when a truck driver attacked him is being recognized for his valor.

Captain Brian Dalton was surprised with two one-of-a-kind gifts during Monday night's Sugarcreek council meeting. One was a wooden American flag custom-made by U.S. Navy Veteran Joe Burdick. The other was a scale-model replica of Dalton's Sugarcreek Police cruiser built by retired sergeant Bob Doles who drove in from Shaker Heights to give it to Dalton in person.

"I’ve been doing this for the last two years now. I buy these diecast police cars and I decorate them to the department of the officer who has been seriously injured in an incident and survives, and this is a vehicle made for Sugarcreek for Captain Brian Dalton," he says.

Dalton was seriously injured June 26th when the 32-year-old North Carolina driver stabbed him in the neck multiple times with a screwdriver during a routine traffic investigation that escalated into an officer-initiated shooting. Dalton says he hopes the encounter will serve as a training tool for other law enforcement officers.

"Well, of course with any situation, you do review your tactics. You review things you could have done differently, and you do do that, but I guess I would use the event as if officers down the line can use that maybe enhance their training, I think that would be a positive thing," he says.

Dalton says he appreciates the time and thought that went into both gifts and the outpouring of support he has received from the community.

"I’ve felt nothing but supported by them. I’m very thankful of it. Given the situation and the circumstances, having that support makes it more bearable," he says.

Dalton says he plans to keep the model in his home and display the flag at the station.