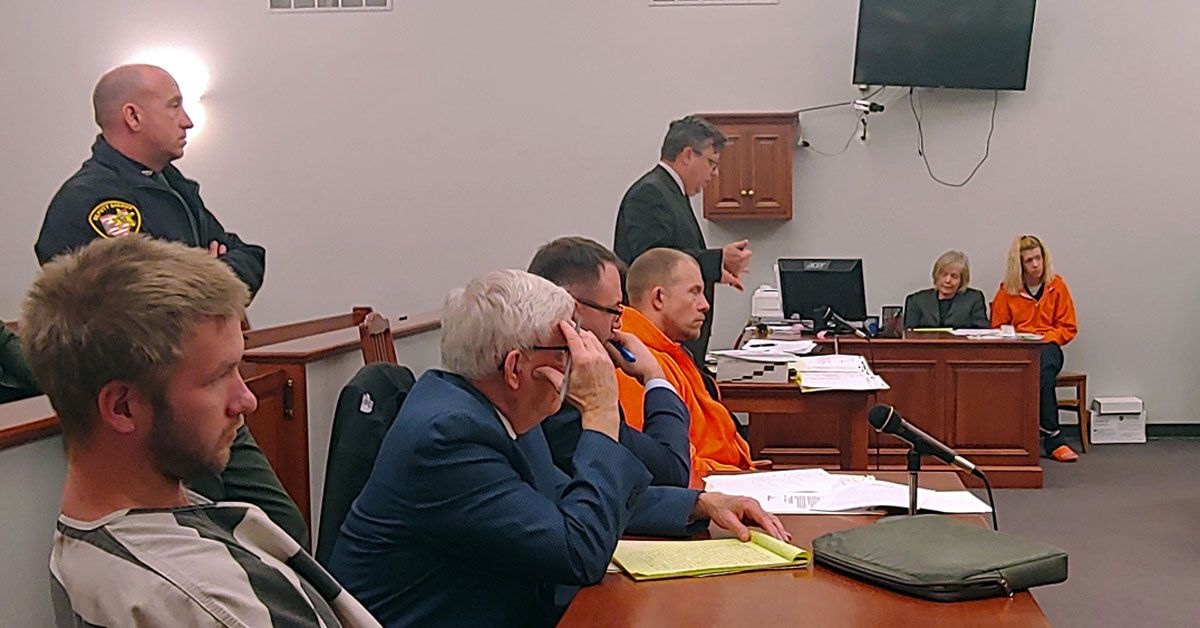 Lucian Lambes, Ian Cultrona and Lisa Freetage appeared in Southern District Court Thursday for a preliminary hearing. Lambes and Douglas M. Casteel are both charged with aggravated robbery in connection with an alleged robbery in Oxford Township that resulted in a nonfatal gunshot wound to a 17-year-old juvenile. Cultrona, Freetage and Samantha S. Owen are charged with complicity to commit aggravated robbery, and Cultrona is also charged with conspiracy. (Photo by Stacey Carmany, Tusco TV)

Uhrichsville, Ohio - New details are emerging about an alleged robbery last week in Oxford Township that resulted in a nonfatal gunshot wound to a 17-year-old juvenile.

The five people charged in connection with the incident all appeared in Southern District Court Thursday for preliminary hearings.

During the hearing, two detectives from the Tuscarawas County Sheriff’s Office fielded questions from Tuscarawas County Prosecutor Ryan Styer and the defense attorneys representing Lambes, Cultrona and Freetage. Casteel and Owen both waived their right to a preliminary hearing.

Detective Adam Fisher shared the victim’s account of the incident. He said he interviewed the teen at Coshocton County Memorial Hospital where he was being treated for non-life-threatening injuries, and the juvenile told him that he had been playing video games at a friend’s when another friend stopped by and picked them up to “cruise”:

“As they were cruising, they were traveling through Newcomerstown and proceeded past the nursing home and out a road that he was unfamiliar with. So he’s describing that as they’re traveling on this road they see a vehicle parked off the side of the road, and then they pull up behind a van farther down the road, which was also pulled off to the opposite side of the road.”

The teen told the detective that a female got out of the van and engaged in a transaction with the driver of the red SUV he was riding in. He said that while this was occurring a black car pulled up behind them. After that, masked men with guns appeared around the car.

Fisher said the victim told him that the driver put the car in gear and attempted to flee the scene, at which point five or six rounds were fired, and one of those rounds struck the rear tire.

Fisher said the victim told him the black vehicle then began pursuing them while continuing to fire rounds. He says that at some point during the pursuit, the victim jumped into the backseat, which is when he recalled being struck.

Fisher also provided additional details about the extent of the teen’s injuries.

“What was the significant injury?” he asked.

“The top third of his right pointer finger was blown off by one of the rounds from the firearm,” Fisher responded.

Detective Lt. Jeff Moore explained how the three occupants of the vehicle were able to escape from their pursuers with help from the driver of a truck traveling along the same road:

“He (the driver of the truck) approached the curve. He hears multiple gunshots at that point. As he’s watching in his rearview mirror, he tries to get as far right off the road as he possibly can. The two vehicles pass him on a small bridge, and they continue out of his sight and go onto Guernsey Valley Road. He said that after he re-enters onto Guernsey Valley Road, at that point he sees the red SUV coming in reverse at him. The black car speeds off, and he almost strikes somebody trying to get out of the issue at that point because of this high-speed chase, and he’s hearing the gunshots.”

Moore said the victim and another individual then jumped into the bystander’s truck, and they all fled to the Newcomerstown Police Department.

Moore said officers made contact by phone with the driver of the SUV and learned he had driven to a residence and called a wrecker service to have them pick up the vehicle. He says the SUV was already in transit whenever they took possession of it.

“They were in transport with his car at that time. We intervened at that point and had the car towed to our office.”

Moore says they searched the vehicle and located a bullet in the center console. He says the bullet was the only one that entered into the vehicle. He says they also found top of the victim’s finger, a black backpack, and a plastic bag containing a small amount of marijuana.

Judge Brad Hillyer bound the case over to the grand jury. He granted a personal recognizance bond to Freetage and reduced Owen’s bond to $25,000 with a 10 percent feature.

Under the terms of their pretrial release, the two women were both prohibited from using cell phones, from entering any establishment that serves alcohol and from having any contact with anyone involved in the case. They were also ordered to abide by an 8 p.m. curfew and required to submit to weekly drug screenings.

The three men remain in the Tuscarawas County Jail on million dollar bonds.