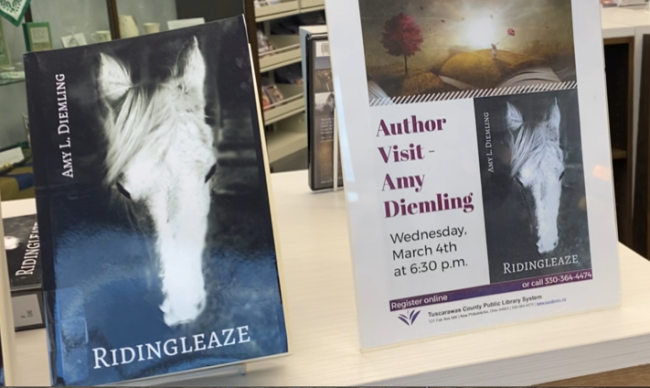 Amy Diemling's debut novel on display at the Main Library.

NEW PHILADELPHIA (TuscoTV) - Amy Diemling of Dover read excerpts from her debut novel, Ridingleaze, last evening at Main Branch Library downtown. We sat down with her beforehand to learn about the novel and her experience writing it.

“It’s a Young Adult fantasy novel,” Diemling says. “It’s about a group of teenagers who ride at a horse stable, but they learn there’s a lot more going on at the stable than what they think. So, without divulging too much information…”

Diemling says she’ll read from sections of Rindingleaze as well as discuss her process and inspiration while creating the tale.

“I’ve loved writing fiction since third grade. I was in Power of the Pen in school; I loved it. So, about eight years ago, I thought I would try to write that novel I always wanted to write,” she says. “And I’m kind of writing what I know; horses, a fascination for magic, and Great Britain because I lived there. I teamed all that together and came up with Ridingleaze.”

Diemling told us that of the 8-year process, roughly two-thirds was spent writing and the final third was spent editing and publishing.

“Tons of outlines upon outlines; it’s a long book. And I’m doing it in between my regular life. So probably five years writing, two years editing. Then I got it published on Amazon, which took about two months.”

When asked to offer advice to aspiring writers, Diemling says that dedication is key.

“Just getting it down and just sticking to it. If you have an idea, you have to keep at it. Even if it’s just a couple chapters a month, a couple pages a week, and eventually it all comes together. And it was really really fun.”

Diemling adds that nothing beats holding a tangible copy of her novel and knowing that others can read it.

“The best part was, well, holding the paperback in my hands, seeing it as a book I could hold. And it’s been published since the end of April so the people who’ve read it, getting their feedback, it’s been really good.”

She says she’ll also read an excerpt from the novel’s forthcoming sequel, to build anticipation with her audience.

“If you read the book, you know it needs a sequel, so I’m going to read the first chapter. (But) it’ll be a little while because I’m expecting a baby in a few months. But probably next year, it’ll be out. There’s a lot of story to this.”

Amy Diemling’s debut novel, Rindingleaze, is available now on Amazon.com. And for more information on events at the Main Library, visit www.tusclibrary.org.