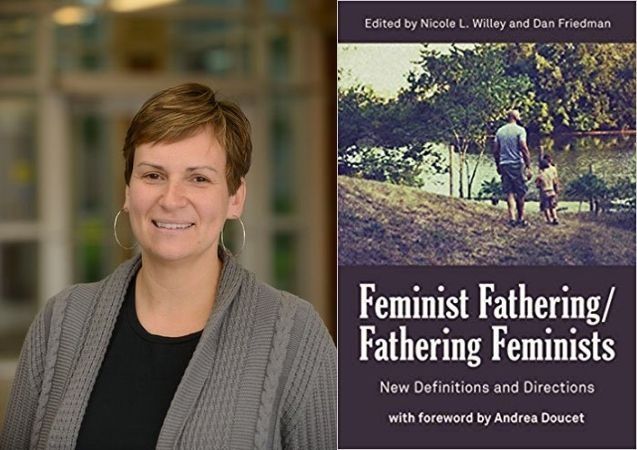 NEW PHILADELPHIA (TuscoTV) - Dr. Nicole Willey has had an eventful February. In addition to her normal role as Professor of English and Coordinator of the Faculty Mentoring Program at Kent State University at Tuscarawas, she’s also been named one of the Women’s Center’s Mothers, Mentors and Muses for 2020.  Oh, and she’s releasing a new book.

“The book is called, Feminist Fathering: Fathering Feminists; New Definitions and Directions. It’s coming out of Demeter Press which is a Canadian mothering press,” Willey says. “It’s a book that’s interrogating what it means to father and what it means to be a feminist father. And how that works in literature and TV shows, but also how that works in real father’s lives.”

Willey says the book stresses equal partnership between parents and egalitarian parenting practices, as they help to move children toward being more-active parents themselves.

“What we know is that children largely replicate the gender roles and the role-modeling they see in their own families, and in their parents. So, it moves us toward trying to remove some of those gender roles about what a mom does and what a dad does, and showing that good parents do all things together.”

It’s an area of study not new to Dr. Willey. She’s been researching parenting for years.

“I have been studying mothering since I was a senior in college. I switched to masculine studies for my PhD at the University of Alabama. Then, when I became a mother, I moved back to Mothering Studies,” Willey says. “Over the past five years, I’ve moved my research toward how we raise sons, and raising sons away from toxic masculinity.”

“It wasn’t a plan; that’s for sure. It just flowed. I found pretty early on that daughters and sons would talk about their mothers, but mothers less often were telling their own stories,” Willey says. “When I got to my dissertation at the University of Alabama, I got really interested in what women were saying about men.Who were the models for a positive type of masculinity? Becoming a mother of two boys was definitely the turning point in my own research and ultimately led to the work on fathering.”

She concludes saying her process editing the book was not without challenges, but the result was well worth it.

“The book is a collection of essays. We have thirteen individual collaborators, in some cases across language barriers. And my co-editor and I only met in person two times during the four years it took to get the book done. That’s a challenge,” Willey says. “But we quickly realized that nobody has written this stuff yet. So it’s brand new; it feels very important and cutting-edge. I’m usually a little later to the party, so it was exciting to be on the beginning end of something.”

Her previous books include, Creating a  a New Ideal of Masculinity for American Men: The Achievement of Sentimental Women Writers in the Mid-Nineteenth Century, and a co-edited collection, Motherhood Memoirs: Mothers Creating/Writing Lives.

But there’s more. Dr. Willey has also been named a 2020 Mother, Mentor, and Muse by the Kent State University Women’s Center.

“I’m very flattered; it’s an award I was aware of in the past, but certainly have never received it before,” Willey says. “I felt very honored that two faculty members who had been through my mentoring program nominated me. I also want to mention that Cherie Bronkar, who runs our library also received the award. So I feel like I’m in very good company.”

Mothers, Mentors, and Muses is the Women’s Center’s signature event. It recognizes Kent State University female-identifying faculty or staff who have made a significant difference in the life of a student or colleague. More than 400 women across the university have received the honor.

In the Kent Set University system, Dr. Nicole Willey is a Faculty Fellow in the Center for Teaching and Learning. She serves as the Mentoring Program Coordinator at the Tuscarawas campus, is a graduate of Leadership Tuscarawas and serves on the Leaders of Tomorrow Summit committee. She lives in New Philadelphia with her partner of twenty-plus years, their two teenaged sons and one hilarious dog.

Willey will be recognized for positively impacting the lives of students and colleagues at the Mothers, Mentors and Muses Scholarship Fundraiser at Kent State in April. She was nominated by Dr. Ikpe Justice Akpan and Dr. Amanda Hayes.

For more information on Mothers, Mentors and Muses, visit www.kent.edu/womenscenter/mothers-mentors-and-muses.