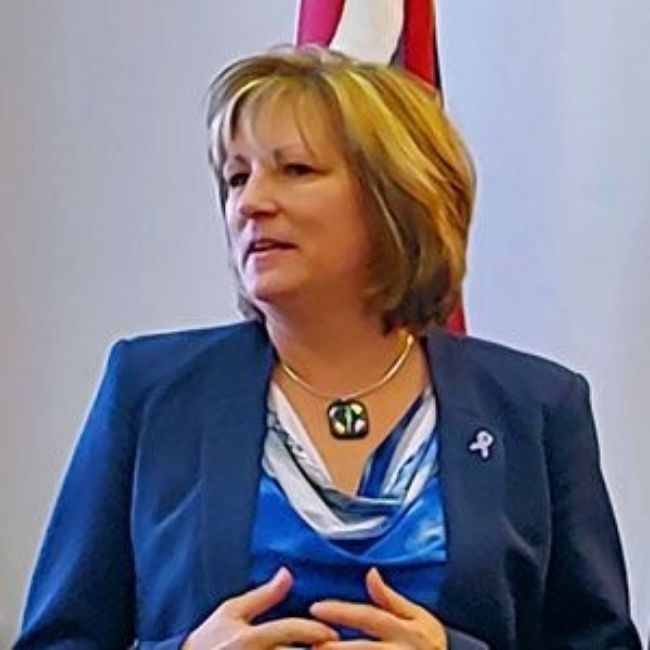 Former Noah's Hope Child Advocacy Center Executive Director Vanessa Stergios is being honored with the 2019 Voice for All Children Award for her ongoing commitment to child abuse prevention and awareness.

Former CAC director honored with 2019 Voice for All Children award

New Philadelphia, Ohio - Noah’s Hope Child Advocacy Center officials are closing out their monthlong child abuse prevention and awareness campaign by recognizing a woman who has been at the forefront of those efforts in Tuscarawas County.

The CAC’s board of directors recently named Vanessa Stergios as their 2019 Voice for All Children award recipient. Stergios served as the local CAC’s executive director from 2012 until late last year when she moved on to a statewide position as a programming director for the Ohio Network of CACs. Board member Kristen Shoup highlighted some of Stergios’ many accomplishments during a ceremony following Monday’s Tuscarawas County Commissioners meeting.

"She built the multi-disciplinary team to widespread commitment by local mental health and law enforcement agencies, Akron Children’s and Children’s Services, prosecutors and victims’ advocates. She developed a responsive approach to victims advocacy with a partnership with the Family and Children’s First Council and service coordination," Shoup says.

Shoup says Stergios also helped the organization earn national accreditation and spearheaded efforts to secure a new permanent headquarters and add service dog Alexa to the CAC’s multi-disciplinary team. Stergios says none of those things would have been possible without the support of the CAC staff and team members and the local community.

"I will say that I’ve done none of those things alone. If it wasn’t for the team of people that we have had that have been dedicated to this mission, we would not have seen the success that we’ve seen," she says.  "I’m very humbled and appreciate the award but it is really not my award. It is this community’s award. It is the MDT and staff and the people that have supported us through all these years."

Ohio Network of CACs Executive Director Miriam Mohamed says they’re grateful to have Stergios on board helping them make meaningful change at the state level.

"The work that’s been done here in Tuscarawas is definitely known at the state level and the work that Vanessa has done helping to move this multi-disciplinary team forward," she says. "Everyone looks to you guys as a model and what better way to make sure that all kids are accessing this type of model throughout the state than having someone of Vanessa’s caliber with us."

Meanwhile, volunteers will soon be removing the more than 2,000 silver pinwheels on the courthouse steps representing the cases of child abuse or neglect reported last year in Tuscarawas County. Stergios says her hope is that one day these displays will no longer be necessary.