Fire at Freddy’s is a total loss 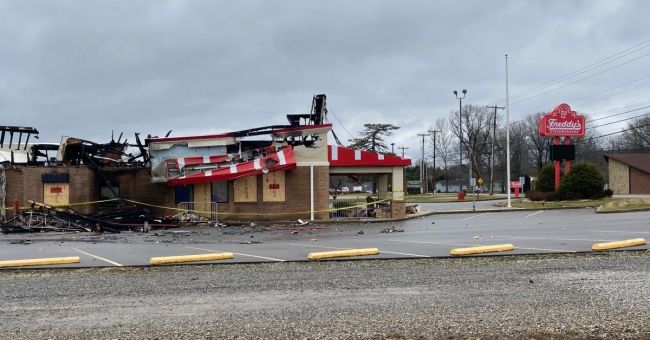 DOVER (WJER) - Freddy’s Frozen Custard & Steakburgers in Dover is a total loss as the result of a fire Thursday morning. A passerby first reported the restaurant fire along North Wooster Ave. at 4:30 a.m. Dover Fire Captain Brooks Ross says the fire was already through the roof in the rear of the building when they arrived.

“So, we attempted to put it out. The fire had made its way to the roof space. We had the roof partially collapse already. So we’re just in defensive mode now,” Ross explains at the scene. “Which means we need to let the fire come to us. And just keep everybody back and everybody safe.”

Ross says there were no injuries.

“There was no one in the building at the time. I talked to one of the managers; they said no one should have been here after 11 p.m. [Wednesday] night.”

“The business is new; you hate to see that,” Ross says. “Fast food restaurants all across the United States’ they know they’re going to have these issues sometimes. So hopefully they have mechanisms in place to help them rebuild right away.”